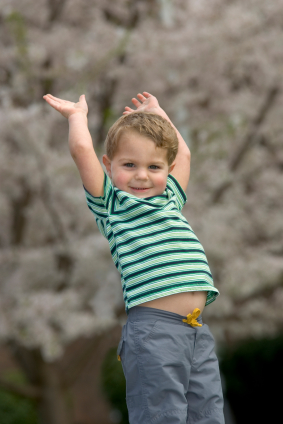 No one will test your child when they are a toddler for ADHD. There are certain behavioral traits that if you pay attention to your child, you will pick up that will tell you that your child may have ADHD. Here are some things to look for.

The first thing I want to address here is that no one will test your child when they are a toddler for ADHD. The reasoning… whether I agree with it or not, is that the testing that is done to diagnosis children with ADHD would not be accurate if done on children at that age. This doesn’t mean that you, the parent, can’t figure it out on your own. The first thing I want you to do if you are worried that your toddler may have ADHD is read another post I did on what ADHD, called Is ADHD Genetic.

Now, you need to know this. There are certain behavioral traits that if you pay attention to your child, you will pick up that will tell you that your child may have ADHD. I say may because there is a chance that what you are seeing is simply part of the growing process for your child. So you really are going to need to know your child, what is normal for them, what is normal in general at their age and what seems… obsessive to you.
From my personal experience, I can look back and tell you the fact that my 3 year old was anal about the way his toys were put away was a sign of ADHD. I would help him clean his room, put the toys in the toy box and his books on shelves… he would then go through all the toys in the toy box, take out each car and truck that he had and line them up against the wall around his room bumper to bumper… by size and type. That is not normal 3 year old behavior, and while it was normal for my son to do that… at 3 it was an early sign of ADHD.

When our son would get excited, either talking or get excited over what he was doing his hands and feet would twirl uncontrollably. The more excited he would get the faster they would twirl. While we thought it was cute… funny at times… that was an early physical symptom of ADHD. You should also pay attention to their ability to be attentive.

I used to think that my son was just very energetic. He would jump from one thing to the next with out hesitation. If something sparked his interest he was off doing it. Now, 2 and 3 year olds have a very short attention span anyway, so when do you know it is a sign of ADHD? When they can’t even sit with you and read a story or color a page in the color book… they may have ADHD. Our son loved to be outside, still does, he could really play outside from the moment he got up to the moment he passed out after dinner. He was also attracted to video games at an early age and legos. Yes, those are two very different games, but he would build elaborate things with his legos, and he would have a story as to why things were the way he built them, and what you could do with it… and so on. The video games, again, if we let him, he could sit and play for hours.

Later we learned it was because video games throw enough stimuli at him to keep him entertained and attentive. See, what you need to realize is that a child with ADHD doesn’t just hear you talking to them, they hear you talking, the hear the wind outside, the see the curtain blow, they hear their sister in the bathroom, they think that a big monster may come out of the sky and how cool would that be, the car horn outside, the firetruck down the road. Where as you and I, and other children who do not have ADHD would block out or ignore all of the other “noise” a child with ADHD not only hears it all, their mind tries to pay attention to it all.

Can you imagine what it would be like if in your head all the time you heard Blue’s Clues, Dora the Explorer, the ABC song, the birds outside, the sound of the microwave and your kids all talking to you at the same time and your mind was trying to pay the same amount of attention to it all! You would pull your hair out. Your toddler isn’t going to pull their hair out… they are going to look for ways that they can bring some order into their head.
So when you come home and your 2 year old has gotten out the bottle of Hershey’s syrup and not only covered the kitchen floor with it… and the refrigerator… and himself… along with making a very nice finger painted picture in it… you may want to pay attention to other things and start talking to your doctor. This would be known as impulsive behavior. Hey it sounds like fun, let’s do it. Their mind is unable to send out the message, “HEY!!! This is wrong!” loud enough for them to hear.

The final “trait” that you can pay attention to is how active they are. Now, all kids are hyper from time to time. (I am pretty sure that energy drinks are manufacturer’s clever way of catching some of that toddler energy and putting it in a drink so we can keep up with them.) But toddlers with ADHD are above and beyond normal hyper… and they are that way all the time. They are always on the go, always in motion, always running, jumping, spinning… always on the go.
Now, I don’t know that your doctor will medicate your child. Actually I am pretty sure that most ADHD meds are not safe for children to use until they are 7. Plus you may not want to medicate them. WE didn’t, even once we found out our son had ADHD (I was in denial). There are other things you can do to help them learn how to control what is happening to them.

Pay attention to what they are eating. You want to limit any stimulants, refined sugars and processed foods. Studies have shown that “green therapy” has also been very effective in helping kids with ADHD. Green therapy is nothing more then get them outside so that they can play in the grass, be among the trees. Talk to a nurse practitioner or an OD (doctor of osteopathy.) The reason that I recommend these two medical professionals is this, they are taught to look at the whole person and find other ways outside of giving them a pill to help them cope with, deal with, and control what is happening to them. You can also go to your local health food store and talk to an expert there. There are things you can do to help your toddler if you suspect that they have ADHD.

Biography
Jennifer Shakeel is a writer and former nurse with over 12 years medical experience. As a mother of two incredible children with one on the way, I am here to share with you what I have learned about parenting and the joys and changes that take place during pregnancy. Together we can laugh and cry and rejoice in the fact that we are moms!

Self Esteem And Your Child With ADHD

Doc, Can You Give My Special Needs Child Nutritional Help?
Comment